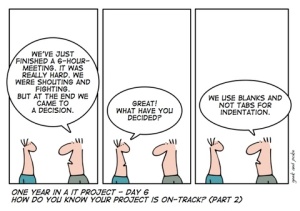 In preparation for our upcoming church strategic planning on May, our would-be facilitator and consultant gave me a very interesting book about running meetings. Here are some of the things I’ve learned.
Rarely does it happen on a team to always be agreeable with everything. If that is prevalent, then we got ourselves “yes” men in the team or a set of non committed individuals. A good team usually brews challenges without foregoing the rules of engagement.
To come up with a major decision a team usually would either make:
A Compromise or
A Consensus
Compromise
When some interesting points are being discussed, usually a leader in a team pursues compromise to give in to the unanimous decision of the majority. This promotes gridlock and unity. Lest one point can take up the entire day which is absolutely draining for everyone. The little sacrifice after all is for the good of the all. This practice is somewhat effective. However, it usually brings out unhappy team members despite the decision to just give in.
Consensus
Consensus on the other hand is an interesting practice. Rather than pursuing a “give in”, it is more interested on having “buy ins”. Meaning to say as a leader and team member you have given a “fair hearing in the court and the jury simply has decided” therefore because people agreed to disagree, then you begin to pick up the matter and decide to buy in. Buying in means the “trial” is done and you have no business of opening up the matter outside the “court”. Since you were not able to convince everyone in the team then you are now convinced that everyone else’s proposition is convincing.