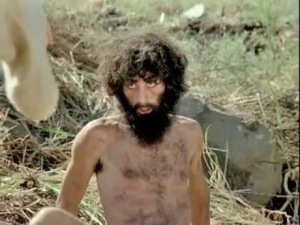 Nothing can be worse than seeing a guy running around naked. This isn’t a frat initiation. John Mark’s record tells of a guy who was  insane, naked, violent, strong, dirty, yelling, and worst— night and day among the tombs and in the hills he would cry out and cut himself with stones. (Mk.5:5)

The demons in him was causing him to cut himself with stones. Nasty!
Have you ever thought about why the demons would do that? Why not just cause the man to roll his eyes white or stick his tongue out sideways or maybe walk like a zombie? Why cause him to bleed, be wounded, be marred, or disfigured?

This demon possessed man cutting himself with stone is not just a picture of a physical opposition of the Devil. This isn’t just an insane expression of protest against God—to make man ugly. This brings us also to the spiritual reality of this unmerciful onslaught.

Look at what God said in Gen. 1:26 :“Let us make man in our image, in our likeness…” For the reason that men could “rule over the fish in the sea and the birds in the sky, over the livestock and all the wild animals, and over all the creatures that move along the ground.”

So as Christians, our identity should be found, rooted, hinged in Christ.

It is not surprising that the devil majors on confusing this generation with our identity. Look, what the devil does is that he tries to cut and divorce us from our true identity in Christ. As a result, we breed a generation of insecure individuals who long for the applause of the world for acceptance and significance.

It is a sad reality that the devil has been “cutting” us off from our identity in Christ. The world offers luxuries in the form of fame, money, position, girlfriends, boyfriends, and so many other things. When he becomes successful in cutting us off, he then unclothes us! That guy was running around naked. Can you imagine the humiliation, the embarrassment. This is his works, he is a traitor. He would hurt us and he will not cover up the hurt; he all the more exposes us. This sounds true in our generation right now that has lost its dignity because of a lost identity.

The demon has been causing our generation to cut itself off from our true identity in Christ.

Friends the Bible says, you were created in the secret place and all your days are ordained long before you came out of your mother’s womb (Ps.39:15-16). Your frame is no secret to the Lord for he himself has created and has woven you. And here’s a great truth that hold such power—-you are fearfully and wonderfully made! (Ps.139:14). Tsong, embryo ka pa lang mahalaga ka na kay Lord at mahal ka na ni Lord.

The word “wonderfully made” in that text comes from the Hebrew nipleti which means fearfully set apart. So understand beloved, you are set apart, you are distinct, you are special, and you are loved! Let that define you. Let Jesus clothe you.

View all posts by Archie Lim

2 thoughts on “The man who was naked & wounded”